Much still remained on our to-do list, but it was already our last day in Sóller. Because of our late arrival on Day 1 and our all-day hiking excursion on Day 2, we still hadn’t been inside the church or the museum and hadn’t gone shopping. Time was limited, because we had a train to catch, so we headed for the church first. Closed. The museum. It’s Monday. Closed. Stores have to be open, right?

I’d read about a regional favorite: fig cake. We’d been keeping an eye out ever since we arrived, but still hadn’t found a piece anywhere. Soon after entering Sóller’s commercial district located just off the main square, we spotted a large bakery with cases along two walls. Unfortunately, the shopkeeper could not speak English and we had no idea how to say “fig” in Spanish. Coming to our rescue…multi-lingual Germans who were kind enough to translate, although with a confused look. Fig cake? Pan de higo? Don’t you know figs are not in season? Nope. Mystery solved. Instead, we ended up buying two boxes of Turrón, a crumbly, egg-white based sweet full of almonds.

Before we left the commercial district, we saw a cluster of tourists ready for exploring. I regretted not taking a picture of the group of German hikers the day earlier in Fornalutx, so I snapped the above photo. I don’t need every fabric and gadget just to go on a hike, but I will not hesitate in the future to follow just such a group of decked-out trekkers, because if they’re serious enough to go all out, it’s likely they’re heading somewhere worth going. Mirador de Ses Barques was just such a destination. Not this time, though, because Palma awaits.

We left the commercial area and entered the main square. The church was open, but now we had no time, so we peeked our heads in, saw one of the darkest churches ever, and then went to the train station, which is only a block or two off the square. 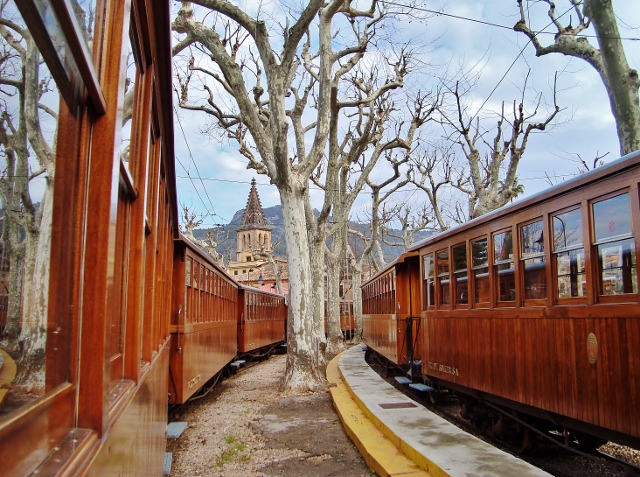 The Ferrocarril de Sóller‘s narrow-gauge train, with its wooden cars, had a historic feel, which makes sense because the train line has been operating since 1912. We climbed aboard the last car as soon as the train arrived at the station. Once seated, it did not take long before the action started. The engine was removed from the “front” of the train, driven(?) along another track to the “back” of the train, then reattached to make the “back” the “front.” As all of this was going on, we noticed a group of five waiting on the platform near our car. We wondered why they didn’t just get into our car, which only contained my husband and me. As the engine locked into place, the five walked toward the train. Ah! They wanted to be in the engine car. Too bad, because once hooked up, the train pulled forward, leaving the gaping-mouthed ticket-holders on the platform.

I would recommend the train ride, but I would have preferred to travel from Palma to Sóller, because instead of the progressively more beautiful urban to rural to mountainous, we traveled the reverse.

Between the forward motion, the side-to-side sway, the rattling, and my unsteady hand, most of my train-trip photos did not turn out well, but I did like the above picture of a boat cresting a green wave just shy of a steel-drum buoy.

Once in Palma, we wheeled our mini-suitcases through half of the city to reach our hotel located on this ridiculously narrow street, Carrer de Sant Jaume, with its sunlight-blocking overhangs. Good thing we didn’t take a cab, because the doors might not have been able to open. Happily, our accommodations at Hotel Born were adequate, reasonably priced, and in a superb location.

We checked in, settled into our room, and freshened up, then went out to grab a bite to eat before we explored Palma.

It took some doing to find a suitable place for lunch. We had walked south from the hotel into the more touristy area where food was overpriced and didn’t look particularly appetizing. On top of that, hawkers tried to lure us into practically empty eateries. Then we came upon La Boveda, which was full of satisfied-looking diners. We’d made a good choice in restaurant and in food selections, ordering lattes, tortilla (potatoes omelette), scrambled eggs with spring onion, bacon-wrapped dates, and pa amb tomàquet (toasted country bread rubbed with garlic, olive oil, and crushed tomato) topped with green olives. Delish!

After lunch, we were ready to explore, arriving at the cathedral at around 3:15. Winter hours. Closed at 3pm. Grrr. On to the museum next door. Closed Mondays. Next museum, closed. At that point we gave up on the idea of indoor exploration and started down the street for a walking tour of Palma. To be continued…

Your Comments Are Welcome Cancel reply